Home/Am I not a Human/Am I Not a Human? (13): The Suffering of Palestinians at the Israeli Roadblocks in the West Bank 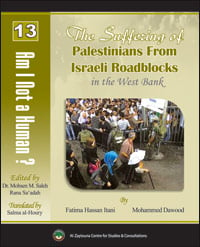