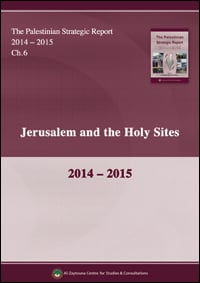 This study is the approved English translation of Jerusalem and Holy Sites, which is the first section of chapter six of the Palestinian Strategic Report 2014-2015, edited by Prof. Dr. Mohsen Mohammad Saleh. The Arabic version of this report was released in 2016 and the draft of this chapter was written by Ziad Bhies.

This section discusses the Israeli aggression on Jerusalem and the holy sites, Judiazation process, and the various developments of the political, religious, and legal positions towards al-Aqsa mosque. In addition, it explores the increase in the representation of temple associations in the Israeli Knesset. It also explores the excavations and constructions under al-Aqsa mosque and in its vicinity, the Jewish presence inside the mosque and the interference in its administration.

During that period, there was a systematic escalation in the Jewish demands regarding their entry into the mosque, while Muslim worshippers were suffering from constant harassment. This section discusses the Israeli aggression on Islamic and Christian holy sites in Jerusalem and in other parts of Palestine. As for the Separation Wall around Jerusalem and the infrastructure that reinforces the Jewish presence in Jerusalem, various development happened during 2014-2015.

Al-Zaytouna Centre for Studies and Consultations, 10/11/2016