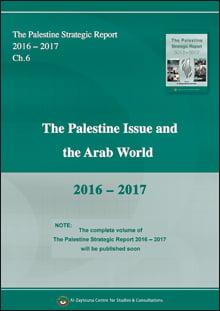 This study is the approved English translation of chapter six of The Palestine Strategic Report 2016–2017, edited by Prof. Dr. Mohsen Mohammad Saleh. It is an analytical study of the conditions of the Palestine issue and the Arab World in 2016–2017. The Arabic version of this Report was recently released in 2018, and the draft of this chapter was written by Hasan Ibhais.

This chapter discusses the Palestine issue and the Arab world. It explores positions of the League of Arab States concerning the Palestine issue and the schism, the position on the peace process, positions and roles of some key states, such as Egypt, Jordan, Syria, Lebanon, GCC countries, and others. It also discusses developments concerning political and economic normalization of some Arab countries with Israel.

Al-Zaytouna Centre for Studies and Consultations, 26/7/2018