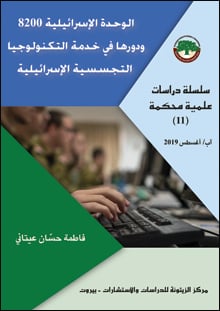 Al-Zaytouna Centre for Studies and Consultations has published an academic article entitled, “Israeli Unit 8200 and its Role in Serving Israeli Espionage Technology,” by the researcher in al-Zaytouna Centre and the specialist in Palestinian affairs, Fatima Itani.

The developments in technology, especially in communication technology, have brought about many social and economic benefits, but at the same time, it has posed many new challenges that have promoted cyber espionage.

This study attempts to shed light on the historical background of the Zionist intelligence activity, especially the founding of the Israeli Military Intelligence Unit 8200, which is specialized in cyber-surveillance technologies, and which some consider it the equivalent of the National Security Agency (NSA).

This study has sought to highlight Israel’s undeclared objectives in developing such technologies with the aim to realize security, political and economic gains at the international level. It would use such technology or sell it to selected companies, governments, countries and parties, allowing them to simply reach the information they want.

Al-Zaytouna Centre for Studies and Consultations, 5/9/2019