Home/Other/American Foreign Policy & the Muslim World
View cart “Introduction to the Issue of Palestinian Refugees” has been added to your cart. 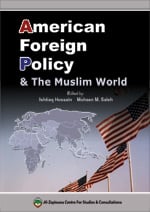