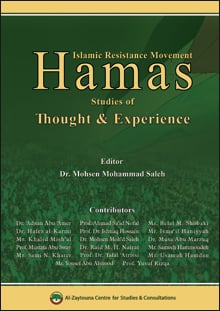 Al-Zaytouna Centre for Studies and Consultations in Beirut has launched the English version of the book “The Islamic Resistance Movement Hamas: Studies of Thought and Experience,” which was co-written by a group of professors specializing in the Palestinian issue and five senior Hamas leaders. The 704-page book is edited by Prof. Dr. Mohsen Mohammad Saleh.

The book examines Hamas’s vision and experience in all its aspects. The work sticks to two main commitments: First, adherence to academic research methods, and the accuracy, objectivity and extensive documentation necessary to them. The second is the attempt to present Hamas as it really is, whether by the contributions of specialized researches, who are well informed of Hamas and its experience; or by the contributions of Hamas leaders, who have addressed a number of issues and presented a more comprehensive picture of the Movement. Particularly so when the available literature is insufficient to clarify all the issues being researched, especially for Western audiences interested in understanding the Palestinian issue, of which Hamas has become a key component in the past decade.

The book falls in two parts. The first is a collection of eleven studies on Hamas and its experience, in which chapter one presents an overview of the movement experience and history. It discusses the background and inception, and considers Hamas a continuation of the work of the Muslim Brothers (MB) movement that began in the form of popular advocacy through a network of branches and offices beginning in 1945. Interestingly, this chapter examines events that reflect the extent of the MB movement’s participation in armed resistance as well as preaching activities, in addition to their links to the establishment of the Fatah movement, which was co-founded by MB figures. This chapter digs deeper in to the stages that Hamas underwent, especially between 1987 and 2005.

The second chapter gives the reader the chance to examine Hamas’s political vision, addressing the wellsprings of Hamas’s political ideology, its approach to religion and state, law, and constitution, and its views on nationalism, secularism, and democracy. Finally, it addresses the rights of minorities in Hamas’s political thought.

The chapter contains a plethora of answers to questions usually raised by those interested to learn about Hamas’s ideas, bearing in mind that it is difficult to find material that expresses Hamas’s intellectual frameworks in such a comprehensive manner, except through some of the interviews, which still are no match for the topics covered by the book.

In the third chapter, we delve into Hamas’ conceptualization of the other, meaning Hamas’s view of Israel, Judaism, Jews, Zionism and Zionists, which is the basis for understanding the background and future of the conflict.

The book, in the fourth and fifth chapters, continues to analyze the relationship between Hamas and the Palestine Liberation Organization (PLO) and its factions, and Hamas’s position on Islamic Palestinian movements including the Sufis and Salafis, Hizb ut-Tahrir, and the Islamic Jihad Movement in Palestine (PIJ), explaining the convergences and divergences with these factions. This is based on analyzing both Hamas’s theoretical framework and policies, drawing from primary sources.

The sixth chapter highlights an important issue, namely, the peace process. Naturally, readers will wonder how Hamas’s actions and visions approach the peace process. In this chapter, the author examines the stages of evolution of Hamas’s political position on the peace process, whether through the movement’s theoretical and intellectual frameworks, or its practices on the ground.

The seventh chapter tackles in detail Hamas’s vision for political and social reform in Palestine, based on the set of principles the group has committed itself to, including its insistence on political freedom for all and the rights of the Palestinian people. Hamas’s political reform project is not confined to internal Palestinian matters, but also cover foreign relations, especially with Arab and Muslim countries. In addition, Hamas’s social reform platform focuses on combatting poverty as the entry point for comprehensive development and reform.

The eighth and ninth chapters overview at length Hamas’s Arab and Islamic relations, by analyzing the determinants, objectives, and dimensions of Hamas’s relations, an explaining its position towards the Arab Spring. They also examine Hamas’s relations with Turkey and Iran and their evolution.

The tenth chapter deals with Hamas’s experience in government, following the 2006 legislative elections. This chapter explores the defects within the Palestinian political system in order to determine the environment and challenges that Hamas faced. Finally, it assesses Hamas performance in governance in the period 2006–2012.

The eleventh chapter concludes the first part of the book by reviewing Western academic literature on Hamas, with a view to answer the following fundamental question: To what extent have these studies succeeded in understanding the true nature of Hamas?

The second part of the book includes contributions by five senior Hamas leaders attempting to answer a miscellany of questions regarding different issues appertaining to the Movement. These include a study by Khalid Mish’al, head of Hamas Political Bureau, which is entitled “Hamas: Milestones in Thought and Experience.” A second study entitled “Hamas: A Reading in the Vision and Governance Experience” is contributed by Isma‘il Haniyyah, the new Hamas politburo chief and prime minister of Hamas’s caretaker government. It also includes a contribution by Musa Abu Marzuq, senior Hamas leader and former politburo chief titled Hamas Assessment of the Experience; and a contribution by Usamah Hamdan on Hamas International Relations. The section also includes a paper prepared by Sami Khater, Hamas politburo member, regarding Hamas’s Vision for Managing the Conflict with the “Zionist Enemy.”

The book includes an appendix of major documents related to Hamas and its experience since the issuance of its charter in 1987 until the memorandum of enforcement of the Palestinian reconciliation agreement between Fatah and Hamas (Al-Shati’ Agreement) in 2014 besides key political documents issued in the intervening period.

Be the first to review “The Islamic Resistance Movement (Hamas): Studies of Thoughts & Experience” Cancel reply