First Pages of Paper: The Conditions and Issues of Palestinian Refugees in the Arab World 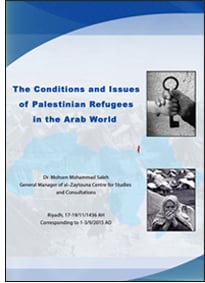 First Pages of “Paper: The Conditions and Issues of Palestinian Refugees in the Arab World

The Conditions and Issues of Palestinian Refugees in the Arab World

The issue of the Palestinian refugees is the most prominent refugee crisis in terms of the number of refugees per capita of the total population. Furthermore, it is the longest-lasting refugee crisis in modern history and has yet to be resolved, more than 67 years later. The Palestinian refugee question has also drawn the highest number of international resolutions, with resolution 194 regarding the right of return for Palestine refugees being reaffirmed more than 120 times.

The Palestinian refugee question in the Arab world has taken on national, nationalist, Islamic, and humanitarian dimensions. The Arab countries have borne their share of the burden of liberating Palestine, supporting the Palestinian people, and working for the return of the refugees. At the same time, the refugees issue took on political, economic, social, and security dimensions: In addition to the political and economic burdens borne by the Arab host countries, the Palestinian people’s quest for return and liberation, and their adoption of armed struggle, led to a lot of friction and conflict in the host countries, especially those that border Palestine. These countries sought to crackdown on Palestinian action in accordance to their vision to their national interests and security needs.

The policy of the Arab regimes in dealing with the refugees ranged from giving them full citizenship rights like in Jordan, to complete denials of all civil rights like in Lebanon. Some Arab regimes tried to take political and military advantage of the presence of Palestinian refugees in their territories, and of the difficulty of their conditions and needs. In other cases, the Palestinians fell victim to internal, local, or inter-Arab disputes. A number of countries, meanwhile, had a net gain from Palestinian refugee presence, where Palestinians had important roles in their development and renaissance.

Introduction: The Emergence of the Palestinian Refugees Issue

The Zionists declared the state of Israel on the evening of 14/5/1948. They seized around 77% of historical Palestine (20,770 km2), and forcibly displaced 800 thousand Palestinians outside the territories that became the state of Israel, out of 925 thousand Palestinians who lived there (the total number of Palestinians at the end of 1948 was approx. 1.4 million people). In other words, the Zionist movement displaced around 57% of the Palestinian people from the territory it occupied in 1948. The Zionists displaced 30 thousand others into other areas of the territories occupied in 1948. The number of refugees had increased to 900 thousand by the time the United Nations Relief and Works Agency for Palestine Refugees in the Near East (UNRWA) was established in 1951. The Zionists destroyed around 400 Palestinian villages out of 585 villages that existed in the occupied territory, carrying out 34 massacres in 1948 against Palestinian civilians in the process of dispossessing them, most notoriously the Deir Yassin massacre on 9/4/1948. In that massacre, as the Zionists themselves had admitted, 254 men, women, and children were killed. As for the rest of Palestine, Jordan annexed the West Bank (WB) officially (5,876 km2) and Egypt placed the Gaza Strip (GS) under its control (363 km2).2

The war of 1948 tore the social and economic fabric of the Palestinian people, who found themselves homeless and exposed, after 4,500 years of inhabiting their land.

On 11/12/1948, the UN General Assembly issued resolution 194, calling for the return of Palestinian refugees to their native land and homes. The choice in this matter was placed in the hands of the refugees and not others to decide on their behalf or prevent their return, which was construed as an act of aggression. The resolution also created a UN conciliation commission to facilitate the return of the refugees to their homes and rehabilitate them economically and socially, as well as providing them with reparations.

This resolution was emphasized repeatedly over the years, as Israel continued to oppose its implementation. However, the UN, specifically the Security Council, took no action to pressure or compel Israel to implement the resolution. The UN admitted Israel as a member state, provided that it would allow the return of Palestinian refugees, something that Israel has never agreed to do.

Since 1948, what we know as the Palestinian refugee crisis started. Here, we note the following points:

First: The number of Palestinian refugees is the largest, relative to the size of the population. The initial figure of 800 thousand refugees out of 1.4 million represents a ratio of 57%.

Second: We are facing the longest and largest refugee crisis in the modern era that is yet to be resolved. The Palestinian refugee issue is now around 67 years old, while most other refugee crises have been resolved or on their way to being resolved, from Afghanistan to Bosnia, Somalia, and Armenia and others. No one prevents these refugees from returning home and exercising their civil and political rights.

The UN General Assembly established UNRWA on 8/12/1949, but it did not start its work until May 1950, in order to secure aid for Palestinian refugees.

1. Palestinians in the World

[1] This paper was presented in the conference “Refuge and the Security, Political and Social Dimensions” that was organized by Naif Arab University for Security Sciences in collaboration with the Office of the United Nations High Commissioner for Refugees, held in Riyadh, KSA, on 17-19/11/1436 AH corresponding to 1–3/9/2015 AD.
[2] Prof. Dr. Mohsen Mohammad Saleh, General Manager of al-Zaytouna Centre for Studies and Consultations

Al-Zaytouna Centre for Studies and Consultations, 4/2/2016