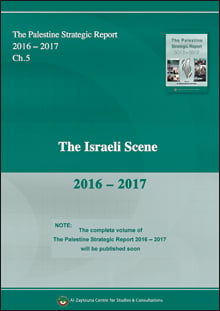 This study is the approved English translation of chapter five of The Palestine Strategic Report 2016–2017, edited by Prof. Dr. Mohsen Mohammad Saleh. It is an analytical study of the impact of changes in the Israeli situation on the Palestine issue in 2016–2017. The Arabic version of this Report was recently released in 2018, and the draft of this chapter was written by Dr. Johnny Mansour, Iqbal ‘Omeish and Basem El Kassem.

This chapter discusses the Israeli scene, including the most prominent Israeli political, demographic, economic and military developments. It explores how the left wing declined and the far right wing strengthened, the racist laws and political prosecutions, State Comptroller report on the Gaza War, the death of Shimon Peres and the repercussions of his funeral, increasing the “Jewishness of the State” at the expense of its democracy, and the moral scandals. It also discussed how Netanyahu and his government were investigated for corruption and bribery, the development of the settlement project domestically, and the Jerusalem Intifadah and its implications.

Al-Zaytouna Centre for Studies and Consultations, 17/7/2018